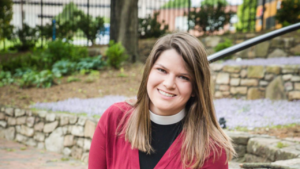 The Rev Whitney Burton was appointed Rector of the Episcopal Church of the Good Shepherd in Dunedin, FL in May 2021. A native of Atlanta, she joined the parish with her husband Steven Smith on May 17, 2021.

Before being appointed as Rector of Episcopal Church of the Good Shepherd in Dunedin, the Rev. Burton served as associate for outreach and community life at St. John’s Episcopal Church in Roanoke, VA beginning in 2015. While at St. John’s in the Diocese of Southwestern Virginia, she served on the Executive Board, where she headed up the Missions Committee, and currently serves on the Disciplinary Committee. Previously she was resident chaplain at the University of the South in Sewanee, Tenn. She has also served in the Diocese of Southwest Florida; during the summer of 2014, she was seminarian intern at St. Mark, Marco Island. She holds a Master of Divinity from the University of the South, and a B.A. in Religious Studies and Philosophy from the University of South Carolina.

© 2023 Episcopal Church of the Good Shepherd. All rights reserved.